It was 40 years ago this morning that I started my bizarre hobby of trying to get distant TV stations on our antenna (in Niagara Falls, Ontario). Now after getting 1,086 stations from 9 provinces, 38 states and 15 countries, that keen interest still carries on.

The day before July 25, 1976, I decided I was going to get up early every morning and check the TV for distant stations. I had dabbled in TV DXing before, looking for those stations in the TV Guide that we never watched (or couldn't seem to get) as early as 1969, at the age of 6. I found my first "unlisted" station that same year, WICU 12 Erie, Pennsylvania, and then my first "real" DX in 1972 with WTOL 11 Toledo, Ohio. But now, this was going to be organized and I was going to keep a log.

WTOL had been my stagnant record for 4 years. That first morning, I was determined to find something equal or farther away. Luckily, conditions were favourable. I found a station battling with my semi-local Channel 6 Paris, ON, it ended up being WTVN 6 Columbus, Ohio. At a distance of 298 miles, I had already beaten my old record on the very first day. I was pumped wondering what I would get next.

On the 3rd day, in the evening at 6:29 p.m., I was totally blown away when I found a strong signal on Channel 3 that was showing the weather for Florida! That was crazy. It was in colour and easily watchable. It was WEAR Pensacola. Wow, how was this even possible? Florida? How come I couldn't get anything in between? Where was Ohio? Where was Tennessee? Why just one lonely station? My dad saw it too when he came to watch the news. He was impressed enough to tell the guys at work about it (but he also wanted me to change the channel, but relented).

Little did I know that what I saw was "sporadic E-skip", an unpredictable ionospheric propagation mode that was more like what you came across nightly on AM radio than on TV. I didn't find out about E-skip until I got hold of a brochure from the WTFDA (Worldwide TV-FM DX Association) in early 1977. I joined then and have been a member ever since.

WEAR-TV would turn out to be the only skip station I saw that summer. My tropospheric DX extended in all directions, with my best catch ending up being WOTV Channel 8 Grand Rapids, Michigan at 325 miles.

The next year, 1977, opened up the brand new world of E-skip DXing. By the end of that summer I was already up to 6 provinces and 20 states. I was hooked; and have been ever since.

Catches over the years can be found here... http://dxinfocentre.com/hepburn/tv_dx_vhf-lo.html 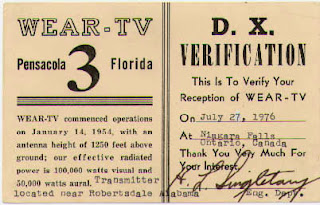